Your search returned 4 results in the Theme: unabridged. 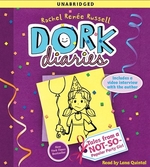 It’s Diary of a Wimpy Kid for girls in this hilarious new novel! Dork Diaries follows eighth grader Nikki Maxwell as she chronicles through text and sketches her move to a snooty new school; her epic battle with her mom for an iPhone; her enthusiasm for drawing and art; and a love/hate fascination with the new school’s queen bee, a girl named Mackenzie, who becomes Nikki’s rival in a schoolwide art competition. Nikki writes about friendships, crushes, popularity, and family with a unique and fresh voice that still conveys a universal authenticity. Nikki’s sketches throughout her diary add humor and spunk to the book, a surefire hit with tween girl readers. 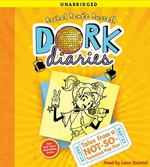 Rachel Renee Russell serves up more laughs and adorable illustrations in the next installment of the bestselling DORK DIARIES series. Nikki Maxwell has been doing everything she can to keep everyone at school from learning the truth--that she's there on scholarship in exchange for her Dad working as the school's exterminator. The last thing Nikki needs is having her friends and--worst case scenario--her crush, Brandon, associating her with the humongous roach on top of her Dad's van! Now it looks like her secret could be about to come out, and Nikki's willing to go to any zany and wacky length to prevent that from happening. The timing seems perfect when a major talent competition is announced with a school scholarship offered as the top prize. Nikki loves to sing and dance and now she gets to have tons of fun with her friends while competing for a chance to free her Dad from his obligation! (And free herself from all that potential damage to her reputation . . .) Once again, hijinks and misunderstandings aplenty ensue, as well as more hilarious and heartwarming moments with Nikki and her friends. 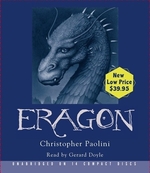 Fifteen-year-old Eragon believes that he is merely a poor farm boy - until his destiny as a Dragon Rider is revealed. Gifted with only an ancient swo... [Read More]

Fifteen-year-old Eragon believes that he is merely a poor farm boy - until his destiny as a Dragon Rider is revealed. Gifted with only an ancient sword, a loyal dragon, and sage advice from an old storyteller, Eragon is soon swept into a dangerous tapestry of magic, glory, and power. Now his choices could save - or destroy - the Empire. "An authentic work of great talent." -- The New York Times Book Review "Christopher Paolini make[s] literary magic with his precocious debut." -- People "Unusual, powerful, fresh, and fluid." -- Booklist, Starred "An auspicious beginning to both career and series." -- Publishers Weekly A New York Times Bestseller A USA Today Bestseller A Book Sense Bestseller 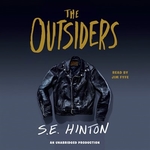 50 years of an iconic classic! This international bestseller and inspiration for a beloved movie is a heroic story of friendship and belonging. ... [Read More]

50 years of an iconic classic! This international bestseller and inspiration for a beloved movie is a heroic story of friendship and belonging. No one ever said life was easy. But Ponyboy is pretty sure that he's got things figured out. He knows that he can count on his brothers, Darry and Sodapop. And he knows that he can count on his friends—true friends who would do anything for him, like Johnny and Two-Bit. But not on much else besides trouble with the Socs, a vicious gang of rich kids whose idea of a good time is beating up on “greasers” like Ponyboy. At least he knows what to expect—until the night someone takes things too far. The Outsiders is a dramatic and enduring work of fiction that laid the groundwork for the YA genre. S. E. Hinton's classic story of a boy who finds himself on the outskirts of regular society remains as powerful today as it was the day it was first published.   "The Outsiders transformed young-adult fiction from a genre mostly about prom queens, football players and high school crushes to one that portrayed a darker, truer world." —The New York Times